Posted at 21:18h in Press Release by gel 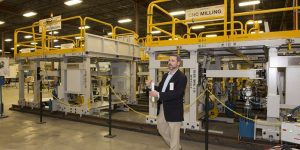 A multimillion-dollar tooling system required to advance the mid-life refurbishment of Ontario Power Generation’s Darlington Nuclear Generating Station is being delivered, from Oakville to Bowmanville this week.

Representatives from nuclear, energy and power companies dropped by Oakville’s Promation Nuclear Ltd. On Tuesday (Dec. 6) to congratulate its team on completing the essential accessibility platform trolley (APT) for the nuclear project. It was done ahead of schedule and under budget.

The celebration gave representatives a chance to see the APT, commissioned by SNC-Lavalin and Aecon, in action.

It was built to provide nuclear workers with access to inspect the nuclear reactor during refurbishment. It is one of a series of key deliveries underpinning the green energy project’s success.

“The APT is one of the first major tools that will be deployed in the field, following defueling and bulkhead removal,” said Mark Zimny, president of Promation Nuclear, which is located off of Brighton Road.

“The whole Promation team is committed to doing its part to ensure the RFR (retube and refurbishment) project goes smoothly.”

He added the company is proud to deliver the tooling system ahead of schedule.

“Promation is setting an example for all RFR and other related major industry projects to be ahead of delivery and under budget.”

The APT is made up of a series of eight modules.

Each is individually lowered into the fuelling duct onto fuelling duct rails, through the bulkhead opening, where they are then joined in pairs and driven into location using remote human-machine interface (HMI) controlled drives. Once in position, the four pairs are connected to create a solid working platform beneath the calandria (nuclear reactor) for workers to access and safely perform their functions.

Darryl Spector, Promation’s vice president and general manager of operations, noted there was a lot of pressure to get this particular inspection tool done because the defueling was done ahead of schedule.

“If we missed the date on this, there were guys ready to use it and they wouldn’t have the equipment,” he said.

The original completion date was Dec. 15. Promation is delivering the tooling system a week early so the operators can train on it early.

“The important thing is we have always strived very hard to set a standard for early delivery and under budget,” he said. “We committed a team to it and we were able to be successful at it.”

While congratulating the Promation team on a job well done, Preston Swafford, chief nuclear officer and executive vice president of SNC-Lavalin, said the successful delivery of the APT system is a great example of what can be achieved when companies work together.

“This partnership with Promation that the Aecon-SNC Lavalin team has put together is just one of the critical elements of pulling off the first refurbishment up in Darlington,” he said.

Once complete, the four Darlington CANDU reactors will produce safe, reliable, affordable and low-carbon energy for Ontario for another 30 years.

“We’ve got a tremendous opportunity here in Ontario, and the nuclear industry, to continue to provide low-cost, clean reliable power to Ontario with future delivery project at Darlington,” said Richard Horrobin, vice president of commercial services at Bruce Power.

“Most Ontarians probably don’t realize 60 per cent of Ontario’s electricity is produced through nuclear generation,” he said. “Most probably think it comes over the falls of Niagara so what we want to do is create more realities around manufacturing and also nuclear.”

“What we want to do is demonstrate the importance of nuclear generation, how important it is for the economy, the economic benefits that are coming from the refurbishment, the thousands of jobs that are being created and the generation of supply chain opportunities. We have worked with OPG (Ontario Power Generation) and Bruce Power to demonstrate that,” said Howcroft.

The OPG expects the Darlington refurbishment project will bring $89.9 billion in economic activity to Ontario.

An independent report conducted by the Conference Board of Canada, shows household consumption should increase by $39.7 billion as a result of this refurbishment project.

It’s also projected the project will add an estimated 8,700 jobs per year until 2026 when the project is complete — with Oakville- and Mississauga-based companies playing an important role.

Promation, which employs 80 people in its Oakville facility, is working on several other important tools for the project, including the bellows replacement toolset, annulus spacer retrieval toolset and calandria tube insert (CTI) release tooling.

Dr. Ron Oberth, president and CEO of the Organization of Canadian Nuclear Industries, said stellar project performance and innovation demonstrated by Promation shows the provincial government made the right decision in investing in the nuclear industry.

“I’m confident over the next many years, you will see more Promations, more small- and medium-sized enterprises deliver and we’ll keep telling the public and politicians how well we’re doing and reinforce for them they made the right decision because they want to hear that, they want to see coverage that shows our industry, our supply chain has a skill set second to none.” …..