Posted at 14:53h in Press Release by Promation 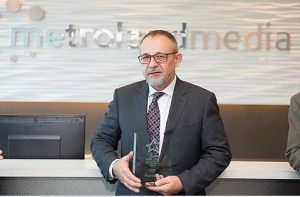 Mark Zimny, president and CEO of Promation, in Oakville, accepts a Halton Employer of Choice Award at the Metroland Halton Division office in Burlington. – Nikki Wesley

Oakville-based Promation, a robotics company, is one of four winners in the 2017 Halton Employer of Choice Award.

The awards, sponsored by Metroland Media, was launched in March and nine businesses in Halton Region applied. The awards were announced in November.

Corporate Culture Employer of choice (CCEC), an independent third party, scores the awards program. Winners are determined by the businesses’ best practices and employee surveys, covering everything from management and employee relations, to career advancement opportunities and benefits.

“We were extremely happy,” said Mark Zimny, president, and CEO of Promation, which is located at 2767 Brighton Rd.

Zimny, a professional mechanical engineer, said the company entered the awards program two years ago, but they came up empty-handed.

This year, Promation not only won a Halton Employer of Choice Award, but also outscored the competition by more than 10 points.

Zimny said he decided to restructure the company two years ago, in response to growth, and he made human resources the main pillar. This award “cements” the new direction in which the company is going, Zimny added.

Promation has doubled its revenues in the past two years, with growth in all three of its divisions — automotive, nuclear and industrial.

The company integrates and manufactures high-quality tooling, automation and robotic systems for some of the biggest companies in the world, including Honda, Toyota, and Tesla.

The systems are fully designed, built and tested in the Oakville facility before being disassembled and shipped to plants across North America and around the world.

Zimny emigrated from his native Poland in 1985 and started Promation out of the basement of his home in Mississauga before he moved the company to Oakville.

In 2017, Promation also received the Large Business of the Year award from the Oakville Chamber of Commerce.

Zimny is also a past winner of the Toronto Region Immigrant Employment Council award for mentoring newcomer professionals. About one-quarter of his staff are immigrants.

On Saturday, Dec. 9, Zimny will celebrate Promation’s being a Halton Employer of Choice with company employees at a Christmas party and open house.