Posted at 14:19h in Press Release by Promation 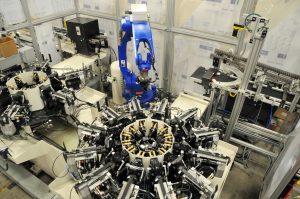 Mark Zimny, P.Eng. President & CEO of Promation, an Oakville based robotics company, measures his company’s success with just one metric: how many it employs.  The company’s revenues have doubled in two years, thanks to robust increases across all three of its divisions – automotive, nuclear and industrial.

“My job now is to double the double,” said Zimny, a professional mechanical engineer. “Hiring people is the simple answer. My measure of what I want to do is to double our employees.”

That would mean 240 employees working in two shifts.

The company is an integrator and manufacturer of high-quality tooling, automation, and robotic systems for some of the biggest companies in the world. Its systems are fully designed, built and tested in Promation’s Brighton Road facility before they are disassembled and shipped to plants across North America and around the world.

“We are in the business of providing the tools to 21st-century factories,” said Zimny.

“Our corporate partners like SNC Lavalin, Honda, Toyota and Tesla take us all over the globe. When those kinds of companies return to you, you know you’re in the right business.”

The design and tooling of equipment used in the refurbishment of Ontario’s nuclear plants, including Bruce Power and Ontario Power Generation, will provide work for decades to come, he says.

“This is a huge market. There are billions of dollars being invested in these refurbishments. We are growing by leaps and bounds to keep up.”

Zimny has his eye on the next growth driver in additive manufacturing. Promation invested more than $1 million in a lab at the University of Waterloo to develop 3D metal printing systems for the aerospace, nuclear, automotive and defence sectors. He sees that as a springboard to another division for Promation.

He’s also exploring expanding into new divisions in defence and aerospace and challenging new markets, including food, packaging and medical.

“We can offer both the culture of the nuclear industry where regulatory compliance is critical, but also the automotive culture of speed and efficiency. That’s a great value proposition to combine the best of those existing divisions.”

Promation earned both the Large Business of the Year award from the Oakville Chamber of Commerce and a Halton Employer of Choice Award in 2017.

Employees are Promation’s foremost asset, says Zimny. The company pays for their education, provides extensive training and fosters an environment where people are given autonomy and responsibility.

Zimny is a past winner of the Toronto Region Immigrant Employment Council award for mentoring newcomer professionals. About one-quarter of Promation’s workforce are immigrants, just as Zimny is himself.

“They are very valuable members of our organization and a huge part of our growth strategy,” he said. “Diversity pays for us, both being across industries but also in ideas and thinking.”

He was born in Poland and is a third-generation entrepreneur. He came to Canada with no money and “worked day and night” for engineering and manufacturing firms before deciding he would rather work around the clock for himself.

He started Promation in his basement in 1995, working in automotive. He expanded to nuclear 10 years later.

That was a critical move because it came at the beginning of a crippling slowdown in the auto sector. While some suppliers were going out of business, Promation managed to triple its revenues.